José Osorio was born in Honduras and is an art-loving entrepreneur who, thanks to contributions from Cera, BRS and the NGO Trias, was given a microcredit and training to get his studio off the ground.

Inspired by Gaudi, he began experimenting with the mosaic technique.The mosaic artist received a small loan of 500 dollars from Pilarh, a partner of Trias Central America and BRS, to purchase basic materials. In exchange, he had to draw up a business plan and follow training courses in business management.

Together with his partner Katty, he set up Trencadis, his own company that now has 14 young employees. José became an entrepreneur who wants to pass on his experience to these young people. He now has projects in different cities and they are active throughout the whole country. Interest is also increasing abroad. He dreams of his own art galleries in which he can exhibit his mosaics. And he is also eager to identify export markets.

In 2017, on the occasion of Cera’s 125th anniversary and BRS’ 25th anniversary, he created the large mosaic “Deep roots, wide branches” in the historic centre of Leuven. 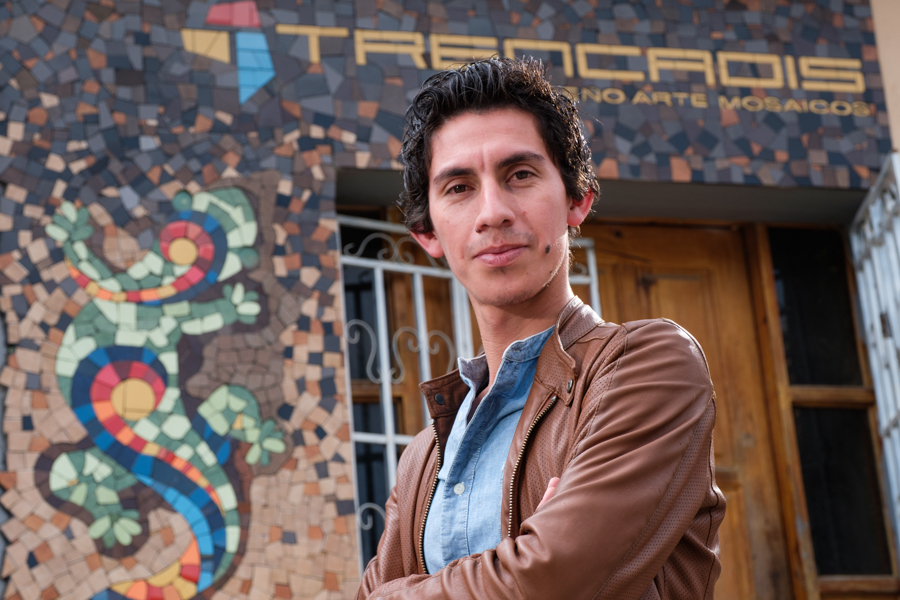 José, how does a Honduran artist like you end up in Belgium to make a mosaic there?

José: “That is the result of several meetings. First and foremost between me and Pilarh. Pilarh is a microfinancing institution in Honduras which was the first to believe in me and my dream. I received a credit of 480 euros to purchase basic materials so that I could launch my business. However, I was unable to provide any guarantee whatsoever. All I had was a good idea and the belief that working hard would get me there. I had to create a business plan and I followed a business management course. With my partner Katty, I set up our own company, Trencadis.”

“Later I met Kurt Van den Neste, who works for BRS. Pilarh had organised a visit to our mosaic workshop to show that, thanks to their support, I can fulfil my dream. And more than that, because my small company now has 14 employees. My story must have meant something to Kurt, because when he was back in Belgium he called to ask if I was interested in creating a large mosaic in the centre of Leuven.”

You talk about your studio as if it’s a business. Are you an entrepreneur or an artist?

José: “I actually feel much more like an entrepreneur than an artist. Of course our mosaics acquire added value because of their beauty and the fact that they are made with great care. But what I like most about what I do is not so much creating works of art, but the fact that it gives me the opportunity to pass on my knowledge and technique and to provide employment for others.”

“If I was first and foremost an artist, I would undoubtedly work more for my own account. I’m not like that. Quite the contrary, in fact. I am actually convinced that one of the keys to my success is the fact that I can help others. Without that I certainly wouldn’t be standing here now.”

“An entrepreneur’s greatest enemy is fear. Don’t be discouraged if something doesn’t work out the first time. Learn from your mistakes and move on!”


Is this mosaic a new step in your career?

José: “Definitely. It’s like a gift from heaven. Who would have dared hope of such a thing two or three years ago? Not me, anyway. You know, I was inspired by the works of Gaudi and started experimenting with the mosaic technique. Mosaics like these didn’t even exist in Honduras. So that means I had to start from scratch to find buyers. We had to win over our customers one by one. And I admit, for the first six months, I didn’t sell anything. Nada. But an entrepreneur’s greatest enemy is fear. Don’t be discouraged if something doesn’t work out the first time. Learn from your mistakes and move on. Thanks to a great deal of courage and perseverance, everything has worked out for us.”

“We started in our own neighbourhood and then gradually expanded to the seven major cities of Honduras. Now I am starting to dare to dream of a studio in Europe. Because I feel there are a lot of possibilities here. Moreover, handmade work is much more highly valued in Europe. In my country, my works are nothing more than an order. A portrait. A street sign. A product. Whereas they are considered as works of art here in Europe. That appreciation really gives me a boost. And not just personally. I note, for example, on social networks that this international recognition also gives us more credibility in Honduras. As a result, new customers find their way to us.”

What will stay with you when you return to Honduras?

José: “Whatever happens, this mosaic for Cera will always be very special to me. First of all, because it’s my first work abroad. It’s even the first time I’ve been outside Honduras. But what has certainly fascinated and moved me is the willingness of everyone at BRS to work together. It was heart-warming to see how all those volunteers joined forces just like that.”

“For the first time, a work of art is not the result of my studio alone, but of an enthusiastic collaboration, in which everyone has invested a part of themselves. We put all the little pieces of stone together to make one big whole. Just like with a cooperative, to which all members contribute. So this mosaic actually became a metaphor for the cooperative concept. I think it is wonderful to think that all the volunteers who worked on the project in Leuven will walk past the mosaic and say: ‘This is something to which I literally and figuratively contributed.’.”